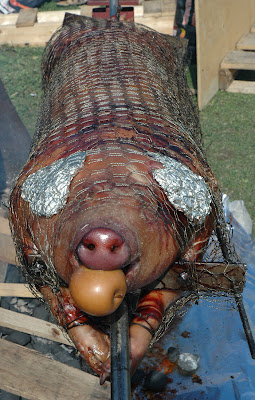 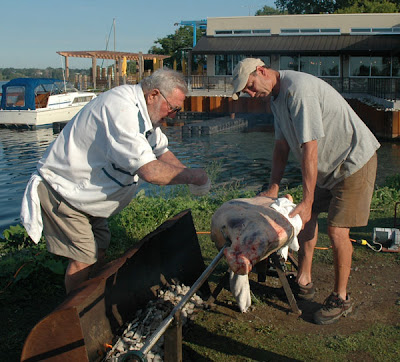 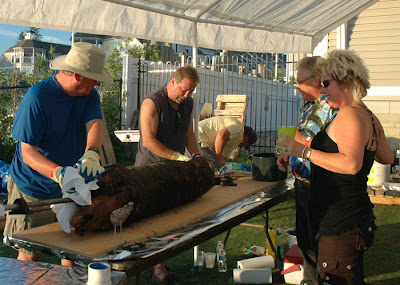 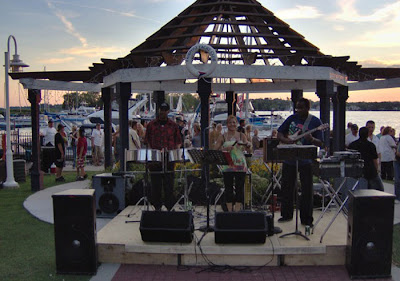 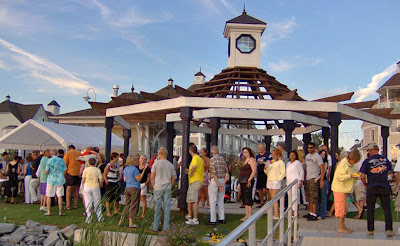 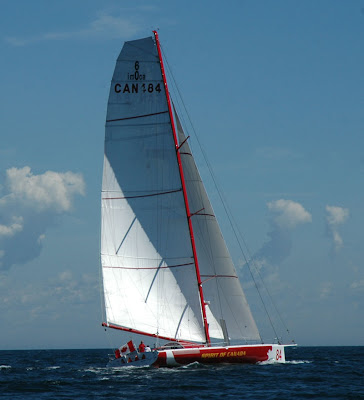 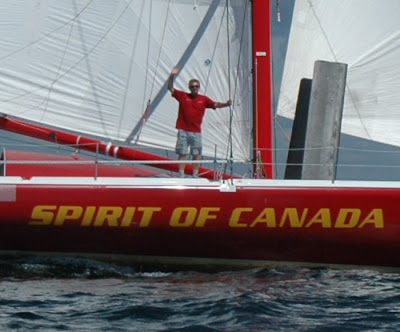 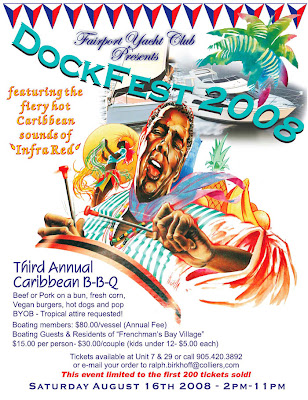 Click on the image to easily read all the text, and to print the poster.
Posted by GxK at 8:09 AM No comments:

As Fairport Yacht Club's Dockfest 2008 approaches, look back at the pig and corn roast held last year and mark Saturday, August 16, on your calendar for this year. Details will be posted soon. 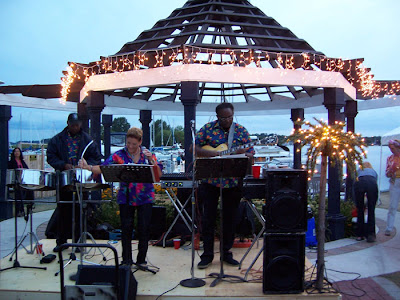 The InfraReds provided a wonderful variety of Caribbean sounds for the listening and dancing pleasure of members and guests. 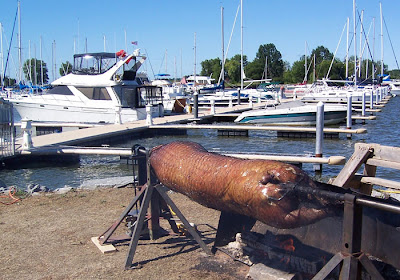 The star of the show was the pig on a spit that took six hours to reach perfection for eating. 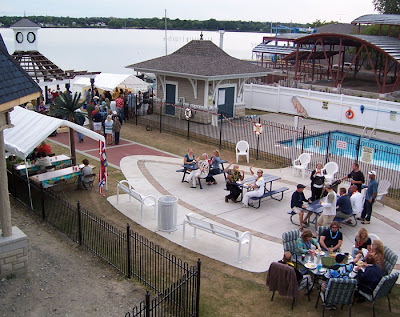 A good time was had by close to 150 members and guests. There's talk of increasing the number of tickets offered for sale for the 2008 event to 200.

Blues late into the night—for a good cause 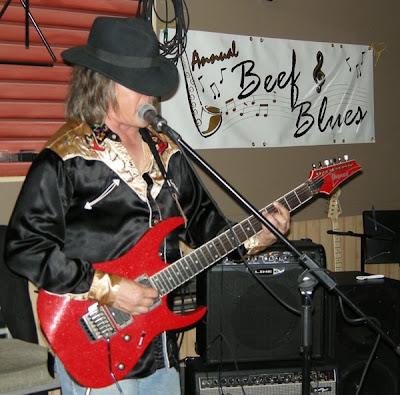 Blues artist Bruce Nasmith was the headliner at the Beef & Blues fund-raiser for Fairport YC organized by Lori and Paul Murray. 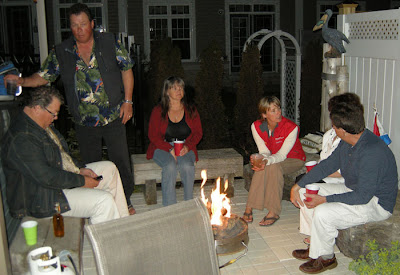 Shane Ryder looks after business on the Blackberry, Ralph Birkhoff reaches for a fresh drink while other members chat around the fire. 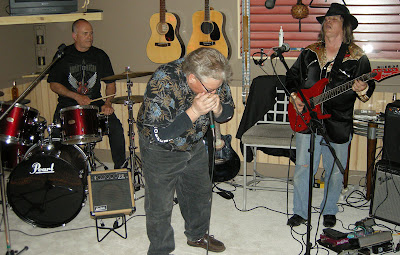 Paul Murray plays drums with Bruce Nasmith on guitar while guest artist Pugs "The Harp" Norman wails away on the harmonica. 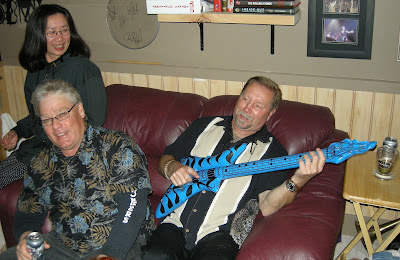 There was a biker among the boaters as Bob Gow arrived at the party on his gorgeous Harley-Davidson Road King. 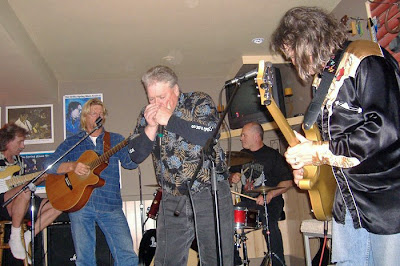 Before the party wound down well after midnight, Bill Coons, bass guitar, and Bob Anderson, rhythm guitar, were also "on stage" with Paul, Pugs and Bruce.

Thank you to all the members and friends who came out in support of our Beef & Blues. Thanks also to the guests attending from Hot Knots Landing Marina (Orillia), Frenchman's Bay Yacht Club (Pickering) & Cathedral Bluffs Yacht Club (Scarborough) as well.

The event was the success we anticipated and two life rings for Fairport Yacht Club will be purchased this week.

Thanks for playin'
Lori & Paul

Time for a BBQ for a good cause 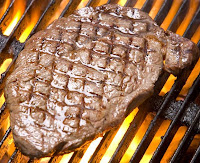 SOLD OUT!
Sorry, we are maxed out for this year, but will be looking for larger facilities for the BBQ in 2009.

What: Fund-raiser for Fairport Yacht Club
When: Saturday, May 24
Where: 1295 Wharf Street #7
Cocktails: 7 p.m.
BBQ: 8 p.m.
Libations: BYOB
Cost: $25/couple or $15/single
Live Entertainment: The blues of Bruce Nasmith & Guests
Proceeds: Liferings for Fairport YC
If you have an instrument, bring it along.

For more information, click here to reach the BBQ organizers, Lori and Paul Murray.
Posted by GxK at 9:38 PM No comments:

Fairport Yacht Club was first incorporated in 1984 by a group of sailors, power and sail, operating from Port Pickering Marina. The name was taken from the Village of Fairport which now is the area at the foot of Liverpool Road in Pickering on the east shore of Frenchman's Bay.

The club was active until the late 1990s when the marina closed and the site was sold to the City of Pickering for parkland. The club moved its burgee to East Shore Marina and tried to carry on but interest soon waned and membership disappeared. Just before the charter was to be revoked, a small group acquired it, filed the outstanding returns and kept the club charter alive for a project that was then in the planning stages.

In 2004, Fairport Yacht Club returned to Frenchman's Bay at its new home at Ontario's first registered Dockominium. The 56-slip Dockominium is located on the east shore of the bay just north of Frenchman's Bay Marina on modern docks with superior facilities. The slips are privately owned.

Fairport Yacht Club functions as the sailing, cruising and social hub for those owners or tenants of the Dockominium who choose to join in social or cruising events.

The past several years have seen a number of visitors to Fairport YC and 2008 promises to be a banner year as we finally have new modern washrooms, showers and laundry open right at the ramp to shore.

The fabulous new Port Restaurant and Lounge has opened right next door. Hy Tea, Creme Brule and the popular Waterfront Bistro with live entertainment are steps apart on Liverpool Road. We now have four restaurants within a five-minute walk, the boutiques of Captain's Walk on Liverpool Road to stroll, and activities at Pickering's waterfront and beach to keep everyone occupied.